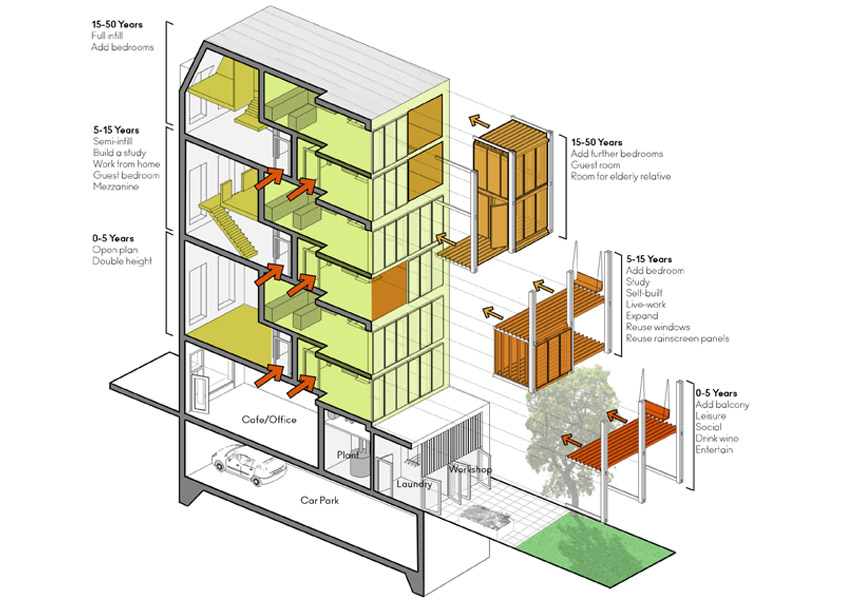 Our proposal explores the possibility of developing a flexible urban apartment model that is capable of being adapted to the changing needs of a household over time.  Drawing on the distinction between ‘soft’ and ‘hard’ flexibility defined by Schneider and Till, we have explored different ways of achieving flexibility.   These include: 4 physical extension through negotiation with neighbours – additional volume to enable future vertical expansion within a fixed volume – framework for physical extension – ways of encouraging ad-hoc arrangements for sharing space between households

Our proposal suggests a model in which the minimum dwelling is developed and traded, but this minimum comes with opportunities for expansion, alteration and reconfiguration.  The model accepts the increasing role of private developers in the provision of housing in the European context, but seeks to harness the long history that Vienna has in providing housing as a social right for citizens, through individual self-build and collective building programmes.  The model assumes increasing costs for housing and decreasing affordability and provides an opportunity for households to buy, or rent, a smaller apartment and to build the extra space that they require – providing stability in the face of fluctuating housing markets and a partial alternative to the market- provision of housing.   This approach could be facilitated by waiving obstacles such as planning consent for residents to carry out these extensions.

Whilst the impetus to increase measurable development densities puts pressure on the quality and size of urban housing, density and the proximity it generates also provides many social opportunities.  Models such as the Baugruppen exploit the opportunities of density to develop shared physical and economic structures that make homes on central urban sites affordable and attainable.

The drive to increase the density of new urban housing is predicated on an interest in numbers: the number of people that can be accommodated on a development site and the number of square metres needed to adequately accommodate a given number of people.  In this context, site capacities, the number of dwellings, habitable rooms and ratio of floor area to building footprint take priority; limited only by volumetric constraints on building height, and the optimal balance between construction complexity and cost in relation to the amount of housing provided.   Under pressure to increase site densities, the apartment as volumetric unit is being reduced to minimum serviceable, sellable dimensions.