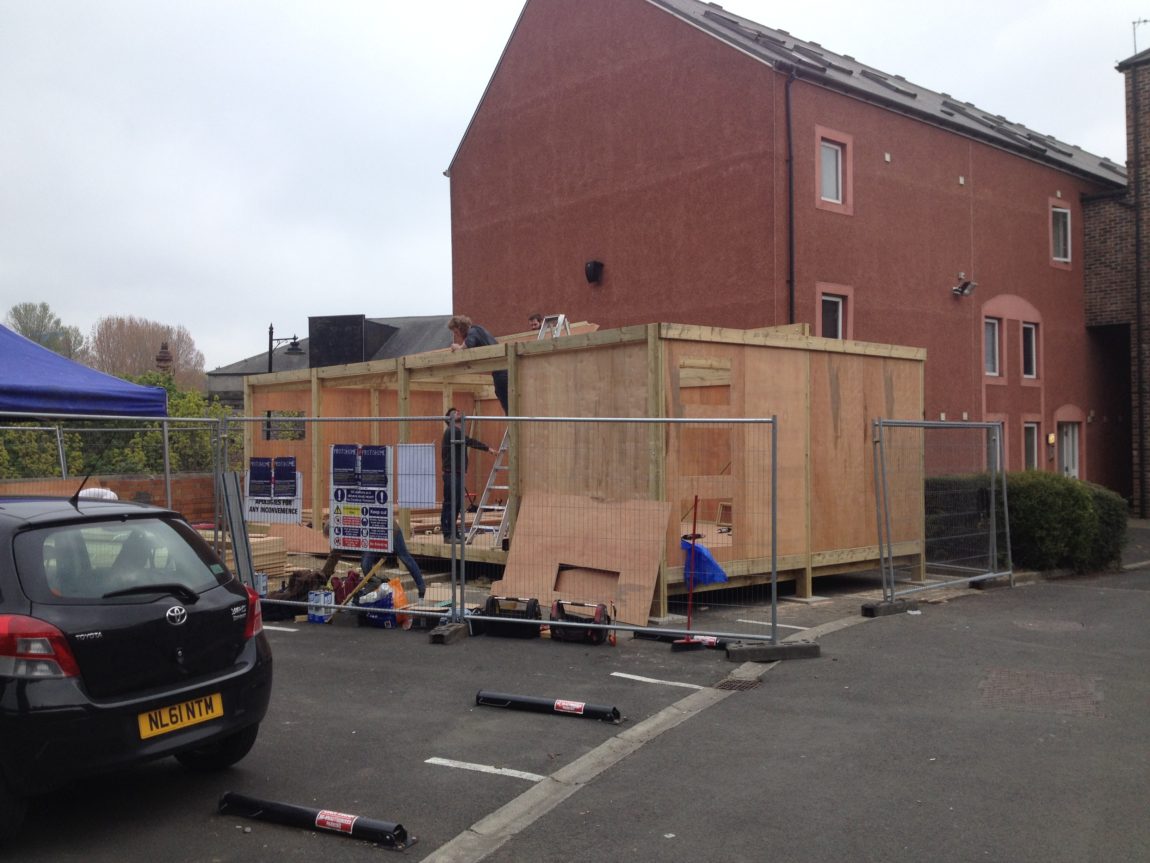 Last week saw the launch of Protohome down in the Ouseburn Valley in Byker. A research project by the artist Julia Hesslop, the project has developed a participatory social housing model through live self-build project down in the Ouseburn. Julia has developed the project with Crisis and Tyne Housing Association and is designed by xsite architecture and constructed with members of Crisis and TILT.

We popped down to enjoy the rare appearance of the sun and lend a hand on its construction.  As one Crisis member said, “Look what we can do in two weeks. They need to give us the land”.  And this is what underpins the lack of self-build and co-built projects in the UK – the inhibitive land ownership system. Newcastle certainly isn’t a City short of vacant sites from the inner city to the suburbs and yet the majority of new development is occurring on the cities green belt (1).

What underpins the lack of development on brownfield site is complicated. It is driven by speculation, transparency of ownership is less than opaque, the value of land often outweighs the value of the buildings on them and in many cases like the Ouseburn Valley, the land has dormant planning constant with little intent to develop. In other words, land is just another asset. When supply of land is low, the value is high.  As a result, the City of Newcastle has seen the largest net percentage loss in the UK of green belt land as developers choose the easy option – build new homes ever increasing away from the City. The supply and management of land is intrinsic to the development of the city in the long term will have to change to supply housing in right areas.  The current government has paid a lot of lip service to the idea of self-build through changes to the NPPF (para. 50 and 159), but fails to address the underlying ability of the UK to make available land for and deliver affordable, inner-city or even suburban self-build projects (2).

Protohome is a great project in many ways as it not only demonstrates how easy and cheap it is for a group of untrained individuals to assemble a small structure in just two weeks, but that it can be transformative to those with greatest need for shelter.  Protohome will be live on-site until August and is running an excellent programme of events including film, theatre, symposiums and workshops exploring the themes around the project.  A list of the events can be viewed here.

(1) Between 2014/2015 Newcastle developed 9% of its green belt to outer city which has been linked to the introduction of the NPPFs preference in favour of development (Source: Planning Resource)

(2) The first self-build serviced plots made available for sale to the general public in the North East recently went on sale at Elmwood Park Green with prices starting at £155000-170000 (land only). The median price for a home in Newcastle is currently £171,480 (Source: RightMove).